The wells in Avigliana

Outside and inside the medieval walls, digged in the rocky rise on which the town was built, there are several wells for water supply, which were excavated at different depths in different times: some of them have a direct intake even with double chambers of water supply.
Among them the most important and best known one is surely the monumental well built in the XIVth century and situated nearly in the centre of Conte Rosso square.

This well is well-known for its considerable depth – 45 metres – and for the abundance and the stability of the water of its stratum. In the XXth century during cleaning works innumerable objects of varied historical and archaelogical importance were found.
Among these objects there was a fragment of a carved column – now at the Town Museum in Susa – of the second half of the XIVth century which represents a Franciscan friar in the guise of a fox preaching to believers symbolized by hens, geese and ducks. Moreover a deep engraving on the crowning stones of the well – M.A. 1787 – remembers that it was restored by Michele Alotto, a mayor in Avigliana and Norberto Rosa’s maternal grandfather, at the end of that century.
CHIESA DI SANTA CROCE (XVII-XVIII) 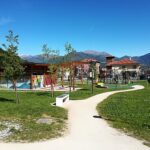 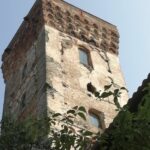